Is Animal Fat Good for You? The Science on Why it’s The Optimal Food for Humans

By Liam McAuliffe Updated on September 12, 2022

Is animal fat good for you? If you’re asking this question you probably have some skepticism, which is understandable considering red meat, pork, butter, and eggs–the main sources of animal fats that we eat–have been the most demonized foods on earth for over 70 years.

Yet when we look at the science on human dietary evolution, the long-term global health outcomes from reducing animal fat in our diets, and the modern controlled trials exploring the risks and benefits of animal fats, the picture becomes alarmingly clear:

Not only is animal fat good for you, reducing and replacing animal fats with vegetable oils is likely responsible for the dramatic spike in chronic inflammatory diseases including heart disease, cancer, and diabetes.

In fact, animal fat is likely the single healthiest and most beneficial nutrient in the human diet.

This claim called out into the echo chamber of an anti-animal, pro-plant dietary establishment can sound a little crazy. So don’t take our word for it. Let’s follow the science through the murk of dietary misinformation.

What is Animal Fat?

Animal Fats in the Western Diet

Animal fats from meat, and milk products from ruminants (cows, buffalo, goats, sheep) provide 35% to 40% of the fat in the average American diet.

The Human Body is an Animal Fat Eating Machine

Modern dietary researchers and carnivore diet thought leaders like Doctor Kiltz and Amber O’Hearn all point out that our cavemen ancestors ate a diet of huge, extremely fatty animals for nearly 2 million years of evolution.

Our modern bodies bare the genetic inheritance of our “lipivore” eating habits in the way:

In the context of human dietary evolution, it was our scavenging of fatty bone meats and brains leftover from the kills of other predators that directly fueled our rapid brain development. Our massive, fat-fueled brains are what separates us from our primate ancestors.

Our ability to prioritize fat as a primary fuel source and feed our brains is, from a metabolic perspective, what makes us human.

From this historical dietary perspective, animal fat is good for you. To vilify animal fats would be oddly suspicious of the body in the context of dietary evolution.

It makes no sense to believe that our bodies evolved a strong desire for animal fat, a way to store it in our own bodies, and an efficient way to use animal fat as our primary energy source, if eating it caused cancer and heart attacks.

And in fact, modern studies tells us conclusively that it doesn’t.

11 Reasons Why Animal Fat is Good for You

1 Humans are Animals that Produce and Consume Their Own Fat

Human breast milk provides around 50-65% of its caloric nutrition as “animal” fat, 54% of which is saturated.

The fact that humans produce an abundance of animal fat to feed our offspring during their most critical developmental phase is a strong indicator that animal fat is good for us.

2 Animal Fat is the Most Abundant Source of Energy

As mentioned above, our pre-human ancestors became humans when they learned first how to scavenge bone fats, and then to hunt giant, extremely fat animals. There’s a reason why nearly all the world’s megafauna is extinct. And we are it.

Our human ancestors adapted to select for animal fat in part because it provides the most energy per gram of all macronutrients.

When we eat excessive amounts of carbs our body converts them to “animal” fat on our body.

When we restrict carbs in alignment with ancestral eating patterns our body metabolizes our own animal fat into potent energy molecules called ketones.

As we’re learning, the type of nutrient we get our energy on can have enormous effects on our metabolic health.

A review of 16 studies found that the consumption of high-fat dairy products like butter can lower your risk of obesity.

Animal fats are highly satiating, meaning that they make you feel fuller faster, and stay full for longer.

Adding more animal fats to your diet can help you eliminate the desire to snack on processed junk foods that feed carb addictions.

Having lower Lipoprotein(a)–a low-density variant of LDL (bad cholesterol)–is generally healthier because it’s a carrier for oxidized phospholipids in our blood plasma. Oxidized lipids can embed themselves in your arterial walls creating atherosclerotic lesions.

Consuming saturated fat reduces the levels of lipoprotein (a) in your bloodstream and increases “good” HDL cholesterol. The overall effect is the improvement of our heart disease risk factors.

One controlled feeding study comparing the consumption of saturated fat to oleic PUFAs found that the saturated fat group reduced their Lp (a) between 8-11% while the oleic group did not.

One large study reported that men and women aged 45-75 years who regularly consume dairy fat may have a reduced risk of a heart attack.

Additionally, one study found that a daily serving of 14 grams of butter may lower your risk of type 2 diabetes by 4%. Type 2 diabetes is strongly associated with an increased risk of heart disease.

In the context of a low-carb diet, animal fats have been shown to alleviate fatty liver disease.

Myristic acid, an animal fat found in milk products is essential for many cellular signaling pathways.

60% of the human brain is fat, with some parts composed of more than 80% saturated fat. The saturated fat we get from animals nourishes these areas of the brain.

Animal fat fuels the rapidly growing infant brain and spares the protein for building a developing the body.

A study published in Pediatric Pathology & Molecular Medicine stated, “evidence supports the view that intervening in childhood (2-15 years) with low-fat low-cholesterol diets or even worse, lipid-lowering drugs to prevent atherosclerotic plaques in adulthood is wasted effort.

Overzealous parents may unwittingly induce malnutrition in their children and many children with restricted access to palatable foods, will yearn for them even more as they become older leading to overweightness.”

These are called fat-soluble vitamins because they are soluble in organic solvents and are absorbed and transported in a manner similar to that of fats.

The retinoid version of vitamin A is only found in animal sources such as liver, butter, whole milk, and egg yolks.

In countries with a low intake of fatty animal foods vitamin A deficiencies are prevalent.

Studies show that CLA may have powerful anti-cancer properties. A 2016 Finnish study,  found that women with adequate CLA levels had a 60% lower incidence of breast cancer.

Many red meats are high in monounsaturated fat.

For instance, around ⅓ of the fat in ribeye steak is monounsaturated fat.

In studies, monounsaturated fat has been shown to be anti-inflammatory and may reduce the risk of heart disease .

Stearic acid is one of the most abundant fatty acids in red meat. For example, it accounts for ⅓ of the saturated fat content in a ribeye steak.

Stearic acid has been shown to lower or have a neutral effect on LDL (bad) cholesterol.

Saturated bonds of most animal fats make them molecularly stable.

The molecular stability of saturated animal fats makes them resist oxidation and rancidity. This holds true even when exposed to high heat.

The stability of animal fats matters because it keeps them safe from forming toxic compounds like acrylamide.

In a study, soybean oil produced more than 1000% more acrylamide than ghee.

The Demonization and Re-Evaluation of Animal Fats

Ever since the 1960’s animal fat has been public health enemy number one. This can be attributed to the infamous Seven Countries study by oceanographic researcher and domineering personality, Ansel Keys.

In a moment when heart disease was on the rise, the American public was seduced by Keys’ career-defining hypothesis that heart disease rates correlated with consumption of saturated fats mainly from animal foods. Upon publication of his study, he was rewarded with a Time Magazine cover. Keys’ study with its demonization of animal fat and its recommendation to replace saturated fats with PUFA-rich vegetable oil, is likely a key factor in the rise of the so-called diseases of civilization.

You can learn more about why vegetable oil is bad for you here. One major problem with Keys’ study is that it omitted countries (and traditional cultures studied by pioneering researcher Weston A. Price) that consumed high amounts of animal fats and had very low incidences of heart disease.

The red dots in the chart below represent the traditional Tokelau, Masai, and Inuit populations who consume “extremely” high percentages of saturated fat yet have extremely low rates of heart disease, cancer, stroke, and diabetes. As you can see from the modern data, when looking at the European continent the more animal fats populations consume the less heart disease they suffer.

Suffice it to say, popular media and the American Heart Association (funded in part by Crisco!) ran with Keys’ hypothesis, and his recommendations have brainwashed generations of Americans to fear healthy animal fats. And the results have been catastrophic.

In the graphs below you can chart a correlation between the reduction in animal fat intake over the last century, the substitution of PUFA from vegetable and seed oils, and a spike in the diseases of civilization. 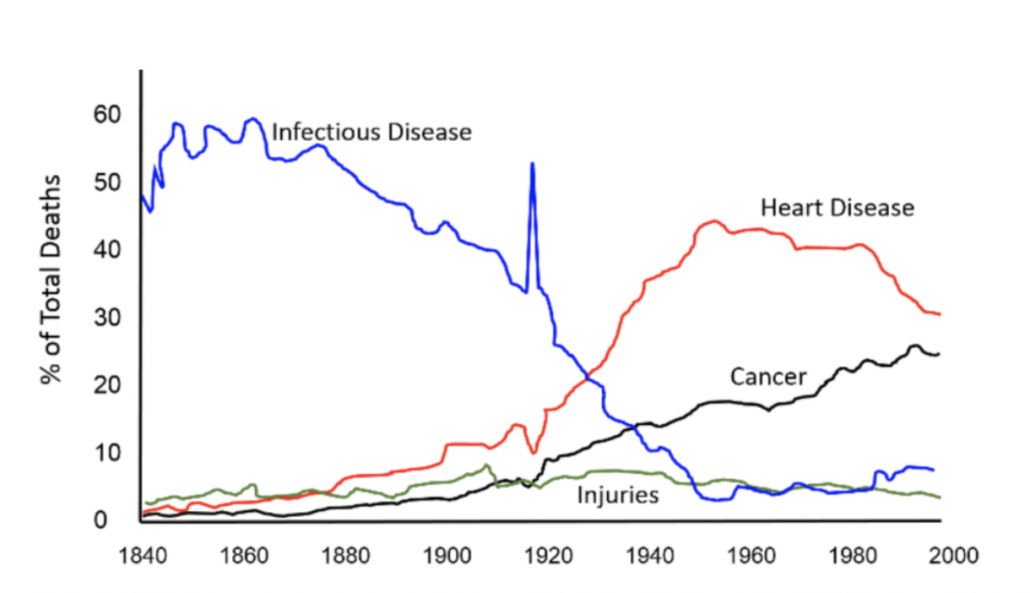 Modern studies with over 1 million participants have determined that for the average person, saturated fat from mostly animal sources is not associated with heart disease, cancer, stroke, diabetes, and death from heart attack This 2020 study co-authored by researchers from leading medical schools around world found that  “Although intake of processed meat has been associated with increased risk of CHD, intake of unprocessed red meat is not, which indicates that the saturated fat content of meat is unlikely to be responsible for this association”.

“Whole-fat dairy, unprocessed meat, and dark chocolate are SFA-rich foods with a complex matrix (of nutrients) that are not associated with an increased risk of CVD. “The totality of available evidence does not support further limiting the intake of such foods.”

This Dutch study from 2016 found that though total saturated fat intake is not related to incidences of heart disease, substituting animal protein for animal fat may increase your risk of heart disease.

As you can see below, unfortunately, people have been heading guidelines to eat leaner meat. Is Animal Fat Good For You: The Takeaway

When examining the available evidence, including evolutionary eating patterns, uniquely human metabolic traits for storing and utilizing fats, and the many crucial roles that animal fats play in the body, it is clear that animal fats are good for you.

Explore more about the health benefits of saturated fats here, and go deeper into the question, “is steak healthy?” here. Already experiencing the benefits of eating meat, then learn more about why eating meat can be good for the environment here.