The mainstream approach to a paleo keto diet is to combine the standard keto macro percentages with paleo diet food selection. This means eliminating grains, legumes, and processed sugars while increasing fat and decreasing carb intake.

The combination of the two diets puts the paleo vs. keto debate to bed. However, the mainstream paleo diet is more of a branding exercise than a true interpretation of what our paleolithic ancestors actually ate. Most of the vegetables and fruit, along with olive and avocado oil, permitted on the paleo diet did not exist in the paleolithic period.

This discrepancy between what the paleo diet brand claims our ancient ancestors ate and what they actually ate has led many experts like Dr. Kiltz to develop more accurate interpretations of keto paleo.

There is significant evidence that our caveman ancestors ate a mostly carnivore diet of fatty meat and organ meats that was ketogenic by default.

What is Paleo Keto?

Paleo keto, like other versions of the keto diet, calls for specific macronutrient percentages. While the paleo aspect means eliminating grains, legumes, processed sugars, and dairy.

People practice paleo keto for the combined effects of whole foods low-carb high-fat way of eating. These benefits include [2][3][4][5]:

So let’s start with the macros and then get into the details.

Here is a paleo keto macro breakdown converted into grams for a 2,000 calories per day diet:

In contrast, the average American on a standard American diet consumes 50%-60% of calories from carbohydrates, 20% of which come from added sugars [6].

Eliminate Most Sources of Carbs

Standard paleo is not really low carb and allows honey, maple syrup, and fruit. To reduce carbs on paleo keto, these are essentially eliminated. There is some room for a small amount of keto-friendly fruits.

On paleo keto, the calories you would get from carbs are replaced by:

Paleo keto eliminates grains and legumes since they are both high in carbs and did not exist in the diets of our paleolithic ancestors, and contain plant toxins and antinutrients.

These compounds are part of a plant’s defense mechanisms. They include phytoalexins, lectins, phytates, and phytohormones are part [7][8][9].

When consumed by humans, these plant toxins are associated with various problems stemming from inflammation, digestive issues, nutrient deficiencies, and leaky gut. A more accurate interpretation of paleo keto would cut out nearly all vegetables, even low-carb keto-friendly veggies. That’s because most vegetables (not just grains and legumes) we eat today did not exist for our paleo ancestors.

Paleo keto does not allow soy products like tofu, tempe, and soybeans, which can be an important source of protein for vegan keto dieters.

Paleo keto eliminates full-fat dairy products that are a staple for many standard keto dieters. Keto cheeses, keto yogurts, butter, and ghee are all off-limits on paleo keto.

Doctor Cordain and colleagues who developed the mainstream paleo diet came up with a 50/50 split between plant and animal sources of calories. But a paleo keto diet calls for considerably more meat and fewer plant foods.

Cordain based this ratio on studies of the remaining hunter gatherer tribes who on average, get at least 51% of their calories from meat [17].

Here’s a list of excellent keto meats to build your paleo keto meal plan around.

Both fatty acids serve important functions in the body, but our paleolithic ancestors evolved on a diet offering a 1:1 ratio. Omega-6s tend to be pro-inflammatory, while Omega-3 are generally anti-inflammatory [13].  On a modern Western diet, the ratio is now around 15:1. This imbalance may be a root cause of chronic inflammation [14][15]. 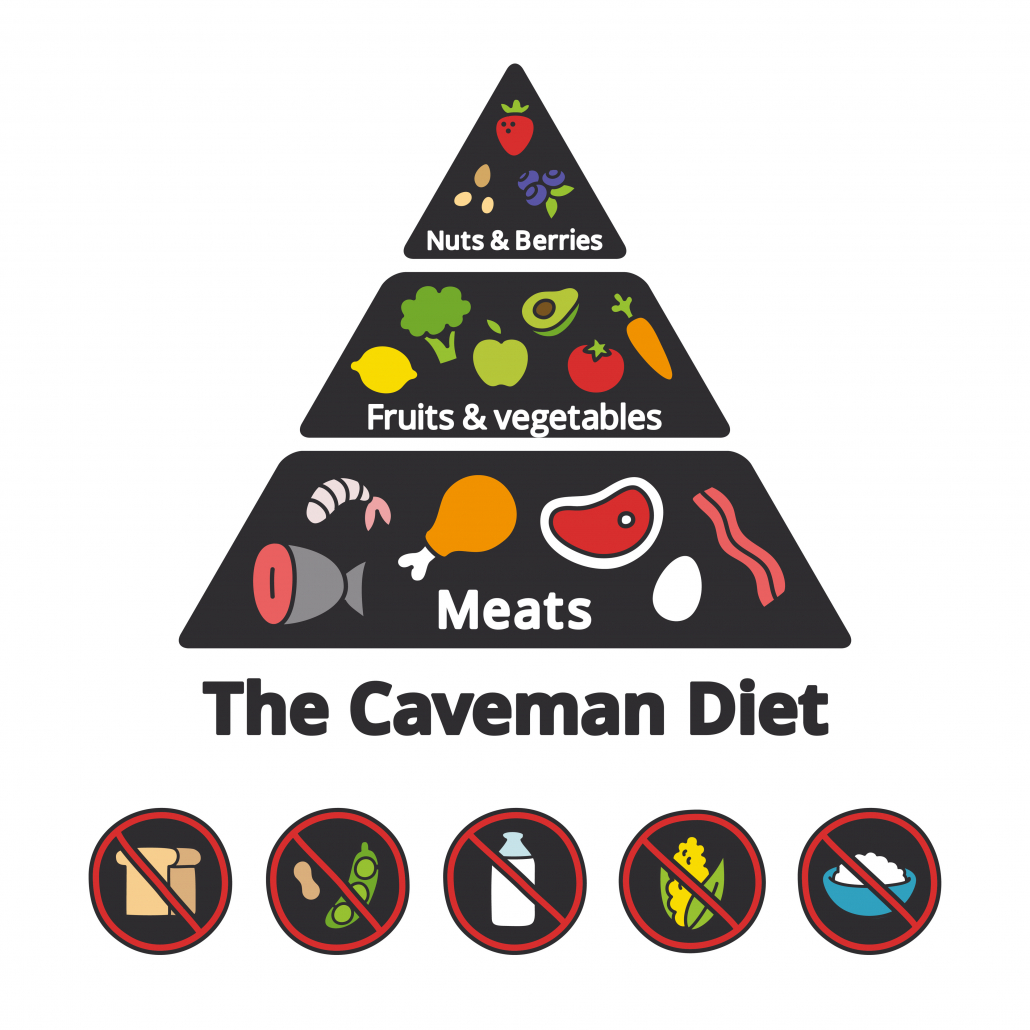 Key to the health benefits of a keto paleo diet is the elimination of processed foods loaded with industrial fats, processed grains, and added sugars and the consumption of healthier whole foods[6].

Whole foods that are typically consumed in a keto-based paleo diet include:

Supermarkets are loaded with packaged and processed foods claiming to be ‘paleo-friendly’ and ‘keto-friendly’. Though these foods meet paleo standards of ingredients and macro ratios, they don’t meet standards of freshness and often contain unhealthy industrial ingredients. But if you must, here is a rundown of keto snacks.

A paleo keto diet is centered around fatty meats. The all-meat carnivore diet can be considered the most accurate interpretation of a paleolithic diet, though many paleo keto dieters allow for a limited selection of low-carb fruits, veggies, and nuts.