Yogurt can offer numerous health benefits stemming from its probiotics, protein, calcium, and healthy fats. Yet yogurt also contains carbs. This all begs the question, is yogurt keto? And, better yet, is there such a thing as keto yogurt?

In this article, we’ll explore the role of yogurt on keto, and review some of the best low-carb yogurt brands on the market.

Keto is a high-fat, low-carb, and moderate protein diet. So, when people ask if they can have yogurt on keto, they’re usually asking if yogurt has keto-friendly macronutrient ratios.

Beware! Most supposedly keto-friendly yogurt companies advertise their products as low-carb. But this can be misleading. Many low-carb, “keto friendly” yogurts are extremely high in protein, yet low in fat.

Too much protein is an issue because your body will turn excess protein into blood sugar (glucose) in a process called gluconeogenesis. This can kick your body out of ketosis.

The standard keto macronutrient ratio for beginners is:

For most people, this means consuming less than 25 grams of carbs per day.

If you’re aiming for an intake of 2,000 per day, a keto macronutrient breakdown looks like:

Gram-for-gram, this works out to around 2.5:1 fat to protein ratio.

However, once you’ve reached sustained ketosis for a few weeks, it is possible to moderately increase carbs without interfering with your body’s ability to produce ketones.

A 2004 study of 50 women found that after two weeks on a keto diet, most participants were able to increase the carbs they ate from the initial 20 grams, to between 40-60 grams per day and still remain in ketosis.2

Your exact upper carb limit will depend on your weight, level of activity, and unique metabolism.

Carbs in Yogurt on Keto

Yogurt is made from milk combined with an active culture i.e. beneficial bacterias/probiotics. Though these bacterias feast on most of the carbs (lactose) in milk, they still leave some carbs behind.

The amounts of carbs in yogurt depend on three key factors:

For instance, low-fat yogurts are bulked and thickened with sugar and gums. While greek yogurt and Icelandic skyr have much of the carbs and liquid strained out, boosting the protein content.

How Many Carbs in Yogurt?

The chart below shows how many carbs you consume in popular nonfat, low-fat, Greek, and keto yogurt options

When considering the carbs in different yogurts alongside their fat and protein ratios, it’s clear that some types of yogurt are indeed “keto-friendly,” at least as occasional keto snacks. While a select few brands can fly the flag of being a truly keto yogurt.

What is Keto Yogurt?

For a yogurt to be “Keto yogurt” it has to be acceptable as an all-around excellent addition to a ketogenic diet. This means that it doesn’t need to be combined with other fats, or limited in its consumption in order to offer an optimal ketogenic macronutrient ratio.

It is important to note that not all low-carb yogurts are truly keto friendly, even if they advertise that they are.

“Peak” brand yogurt, with 17% milkfat, boasts 38.4 grams of fat per serving, and a moderate 12.8 grams of protein. It is the only yogurt we’ve found that is truly a “keto yogurt.”

With a 3:1 fat to protein ratio and only 6.4 grams of net carbs, it makes an excellent all-round addition to a well-formulated ketogenic diet.

When choosing a keto yogurt always look at the ingredient list. Brands with fewer ingredients offer a less processed product, one without industrial sweeteners and oils.

Remember, fresh yogurt is simply milk and natural cultures. Everything else is an attempt to reduce cost, stimulate your carb addiction, or increase shelf life.

What about Greek Yogurt?

Plain, full-fat (5% or more) Greek Yogurt can be occasionally enjoyed as a keto diet food.

With a nearly 1:2 fat to protein ratio, greek yogurt on it’s own provides an overabundance of protein.

To make Greek yogurt more keto-friendly add a few tablespoons of olive oil to boost the fat content, while still getting the benefits of it’s protein, B-vitamins, and probiotics.

Benefits of Eating Yogurt on Keto

When it comes to keto, fat is the key.  Most full-fat and “triple cream” yogurts offer a highly satiating combine of fat and protein.

Yogurt has been shown to help decrease appetite and promote feelings of fullness that contribute to weight loss. 4 5

Keto Yogurt Can Reduce the Risk of Heart Disease and Obesity

A review of 16 studies found that the consumption of high-fat dairy products like butter can lower your risk of obesity. [10]

One large study reported that men and women aged 45-75 years who regularly consume dairy fat may have a reduced risk of a heart attack. [11]

The active cultures in keto yogurt are also called probiotics when considered in the context of our microbiomes–the trillions-strong ecosystem of microorganisms that live in our guts.

Studies show that probiotics play a vital role in essential all our physiological functions, including 7 8 9 10:

Studies show that a keto diet can have transformative positive effects on our microbiome. Supporting these effects with probiotics from keto yogurt may boost these effects.

A 2020 study published in Cell found that the effects of keto on gut health led to reduced inflammation. The effects were so powerful in fact that the researchers suggested a ketogenic diet for use as a therapy for autoimmune disorders of the gut. [50]

Other studies found that ketogenic diets produced beneficial changes to the microbiome that reduced symptoms of multiple sclerosis and epilepsy. [51] [52]

The probiotics in keto yogurt can support keto’s ability to beneficially reset the microbiome in the short term, while populating it with healthy organisms that will keep it balanced in the long run.

After exploring the ingredients and nutrients of over a dozen yogurt brands, we’ve boiled the list of the best low-carb yogurt brands down to the top 5. Here they are in order. Pros: Peak “tripple cream” yogurt packs loads of healthy fat and just the right amount of protein, with minimal carbs for yogurt. It also uses organic milk and cream, a huge plus!

Cons: We could do without the milk protein concentrate and pectin, which is actually a fruit derived carbohydrate. But neither additives seem to appear in high enough amounts to significantly alter the nutrient content. Pros: Alexander Farms is the only keto friendly yogurt on the list that is made with A2 dairy. It is also one of the purest yogurts, with only 3 ingredients: organic milk, organic cream, and live cultures.

The A2 in the title refers to an alternative milk protein. Most milk from cows has A1 proteins. People seek out A2 dairy because when digested A1 proteins break down into beta-casomorphin 7. This compound has been linked to cardiovascular and autoimmune diseases. [36] [37] [38]  A2 milk protein can be found in all goat, sheep, buffalo milk, even when it isn’t labeled A2.

Cons: Has a relatively high amount of carbs. Consuming an entire cup of Alexander Farms yogurt can account for over half of a 25g daily carb limit. So enjoy in moderation. Pros: Cocojune offers the second most fat per serving and the highest fat-to-protein ratio of our keto yogurts on the list at 9:1. It also boasts a very “pure” ingredient list for a non-dairy yogurt option.

Cons: The presence of cassava root means 12 grams of carbs per 1 cup, making Cocojune a keto-friendly yogurt that should only be enjoyed in moderation. Pros: Fage Greek 5% yogurt offers relatively low carbs at only 7.5 grams per cup, or 3 grams per 100gram serving. And the ingredient list is as pure as it comes.

Cons: A nearly 1:2 fat to protein ratio means this yogurt is best enjoyed as part of a higher fat, lower protein recipe or meal plan. 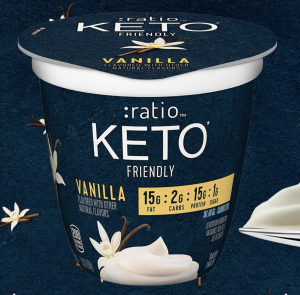 Pros: The only low carb yogurt brand with “keto friendly” written on the label, :ratio backs up their claim by offering a scanty 3.25 grams of carbs per 245 gram (1 cup) serving.

Cons: The relatively extensive ingredient list raises some serious questions: non-fat milk, pasteurized milk, milkfat, and avocado oil add up to a highly processed product. Avocado oil is likely a cost-cutting addition–milkfat is expensive. Avocado is a highly processed industrial oil, but at least it’s comparatively low in inflammatory PUFA’s at only 10%.

The biggest red flag here is the fact that :ratio calls this stuff “vanilla dairy snack”, which means it doesn’t legally meet the requirements of a true yogurt. Cons: Quite high in carbs thanks to added agave nectar. Siggi’s triple cream yogurt should only be enjoyed in small amounts, or augmented with heavy cream. We wish they’d offer a plain “triple cream” option, but for now they’re all flavored and sweetened.

As you can see, all yogurts have carbs, and true keto yogurts aren’t easy to come by.

However, there are a few full-fat, low-carb dairy options that aren’t technically yogurt, but that still provide the fat-soluble vitamins of full-fat dairy, along with probiotics. These include:

Most yogurts, even those high in fat, contain some carbs. So most yogurt, even keto-friendly varieties, should be enjoyed in moderation.

Full-fat Greek yogurt and specialty double cream top yogurts can be keto-friendly, but are best enjoyed in smaller amounts or integrated into a well-formulated keto meal plan.

The best low-carb yogurt for keto we’ve found is Peak brand 17% triple cream yogurt. But it’s a small brand and relatively hard to find. keto yo

To meet the fat intake demands of keto, while avoiding processed ingredients and still getting the benefits of probiotics, we recommend substituting yogurt with creme fraiche.