9 Healthiest Foods to Eat in the World: Separating Fact from Fiction

Pretty much every other list you’ll see of the healthiest foods to eat in the world are plant-based, with the lone meat being salmon. Frankly, these lists do not accord with nutritional science. They’re founded on outdated data, complex beliefs and feelings about eating animals, and the economic interests of industrial agriculture.

Before launching into our science-based list of the healthiest foods to eat in the world, let’s get a few things straight:

How we rank: Taking into account the numerous studies above, we consider only the most nutrient-dense foods. These foods are rich in complex proteins, healthy fats, bioavailable vitamins, minerals, and antioxidants that your body needs to thrive. We’ve included both animal and plant food sources.

If eaten together, this list of foods will provide more than enough of all your macro and micronutrient needs.

If this isn’t the healthy food list you were expecting, it’s time to update your nutritional knowledge. Let’s dive in. For people who still believe in the debunked low-fat diet trend, it can be hard to fathom that this rich cut of steak headlines our list of the healthiest foods to eat in the world. But for people eating a carnivore or ketogenic diet, ribeye is the most beloved fatty keto meat.

Ribeye is so loaded with healthy fats, proteins, and essential micronutrients that you can literally thrive while eating only ribeye, salt, and water. This minimalist version of the carnivore diet is called the Lion Diet.

Ribeye (and other fatty red meats like Brisket, Chuck, New York Strip, Denver, Short ribs, Skirt, etc) are possibly the only food in the world that a human can eat singularly and not only live but thrive. It has everything you need without risks of vitamin toxicity or protein poisoning.

These results make sense when considering the nutrient abundance of Ribeye steak and other fatty ruminant meats. Ribeye is loaded with B vitamins, zinc, selenium, and many compounds that are only found in meat: Beef liver is near the healthiest food in the world. In fact it’s so nutrient-packed that you have to eat it sparingly to protect from nutrient overload–specifically vitamin A. Just a 3.5 ounce serving 2-3 times a week will deliver all its benefits.

The Vitamin A in liver comes in a variety called ‘preformed’, which is more easily absorbed and utilized in your body than the vitamin A found in plant foods. Vitamin A is essential for maintaining healthy skin and vision  [13][14].

B Vitamins and Copper

Beef liver is also loaded with B vitamins that play many roles including the metabolism of fat into energy. B vitamin combined with liver’s copious amounts of copper help maintain healthy bones, blood vessels, nerves, and immune function, and it contributes to iron absorption [15]

The folate (another B vitamin)  in beef liver is critical for healthy fetal development. [16]

Liver contains an enzyme called cytochrome P450. This compound participates in hormone production, detoxification, and the overall health of your own liver. [22] Oysters are one of the healthiest foods to eat in the world thanks to a rich nutrient profile that helps:

Many people know that oysters are high in immune-supporting zinc, with 605% per 3.5 oz serving. Lesser known is that oysters are one of hte best dietary sources of vitamin D. This makes them especially healthy for people who live in latitudes where you don’t get much sun, and during gray winter months.

The zinc, vitamin D, and selenium in oysters work synergistically to support immune function [15].  Vitamin D has been shown to help fight viral infections including COVID-19 [15][16][17].

A 3.5 ounce serving of oysters provides many hard-to-get vitamins and minerals 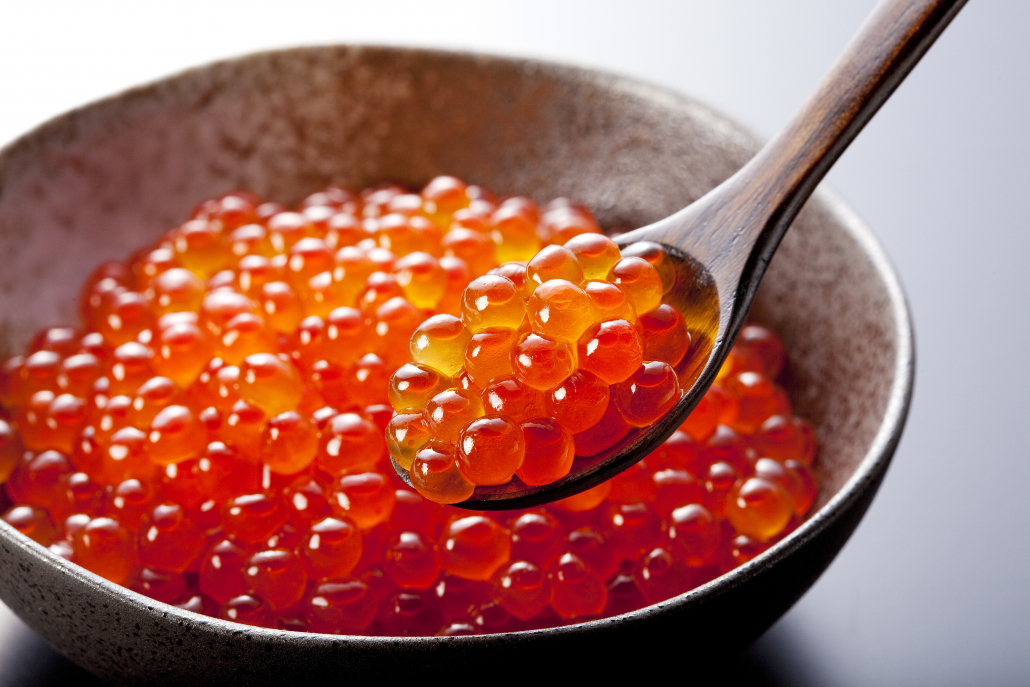 Salmon roe, has long been considered one of the healthiest foods to eat in the world, even by indigenous populations who made salmon roe a part of traditional pregnancy diets.

The abundance of nutrients in salmon roe including omega-3 fatty acids EPA and DHA, along with B12, selenium, high levels of vitamin D, and E support various health goals including:

It’s worth noting that antioxidants are less important when eating a diet low in oxidizing foods. Unfortunately, the standard American diet is loaded with oxidizing added sugar and PUFA vegetable oils.

One study found that dark chocolate offered greater antioxidant activity, along with more polyphenols, and flavanols than any other tested fruits including acai and blueberries [19].

Other studies have found these antioxidant properties of chocolate to powerfully decrease oxidized (bad) LDL cholesterol. In people with high cholesterol, dark chocolate has been shown to increase HDL (good) cholesterol and decrease total LDL [20].

These positive effects on cholesterol are thanks to powerful antioxidants that enter the bloodstream where they protect lipoproteins against oxidative damage [21][22][23].

The heart-protective effects are so powerful that in a large study looking at 470 older men found that chocolate reduced the risk of heart disease by 50% over a period of 15 years [24].

Chocolate is also healthy for your skin. The flavanols in dark chocolate have been shown to improve the flow of blood to the skin, increase hydration and desnity of skin, and protect against sun damage [27].

Avocados are high in both macro and micronutrients that many people eating modern Western diets lack. On a ketogenic diet avocados are one of the few low-carb foods high in potassium and vitamin C.

Avocados are a good source of many B vitamins including folate. Folate plays a key role in the production of red and white blood cells in bone marrow, DNA and RNA, and fetal development [27]

For people practicing vegan or vegetarian keto, avocados are an important staple. However, since avocados are a plant food with plant toxins, some people do have mild to severe allergies [*][*]

The potassium in avocados is essential for nervous system function and blood pressure regulation, and protective against stroke and hypertension [28][29].

A study showed that eating the equivalent of 1 avocado a day for 12 weeks lowered concentrations of fecal bile acid while increasing diversity of healthy gut bacteria [30].

Nutrients in a medium Hass avocado

Eggs contain all the nutrients–healthy fats, proteins, vitamins, and minerals– needed to grow an entire animal, so it’s no wonder that they’re one of the healthiest foods to eat in the world.

A nutrient highlight is an egg’s choline content. Your body needs choline to produce the neurotransmitter acetylcholine crucial for memory, mood, and intelligence. Choline also plays a key role in synthesizing DNA, which is especially important for infant brain development [35].

These little fish are indeed one of the healthiest foods to eat in the world thanks to their combination of healthy fats, abundant protein, and complex of micronutrients.

The B3 in anchovies is crucial for converting food into useable energy. The very high levels of selenium support heart health and thyroid function [48] [49]

Anchovies are fatty fish offering more omega-3 eicosapentaenoic acid (EPA) than nearly every other fish including the much-lauded salmon.

The high selenium and Omega-3s in anchovies can help prevent tumor growth and is used to treat various types of cancer [50] [51] [52]. Beef kidney is another organ meat that makes the list of the healthiest food to eat.

Let’s start with anchovie’s tremendous concentration of B12 with over 1000% per 100-gram serving.

Kidney also offers the rare, organ-specific amino acid L-ergothioneine that directly supports the health of your own kidneys [53].

Most people think of kale as extremely healthy due to its vitamin and mineral content, but in fact, Kale pales in comparison to every food on our list.

See for yourself how kale stacks up against eggs below.

As you can see, eggs are far more nutritious.

Interestingly, even the nutrients like Vitamin A and Vitamin K which Kale famously shines in have some very important caveats.⁠
⁠
Vitamin K which Kale appears to be loaded in is specifically Vitamin K1. Research is now showing however that Vitamin K1 which is found in plant sources like Kale is inferior to Vitamin K2 which is found in meats and cheese.⁠
⁠
Similarly, 4 cups of Kale has 135% of your “vitamin A” which appears to be better than the 49% found in 3 large eggs. But, that’s not the whole story. Vitamin A found in plant foods isn’t even vitamin A, it’s Beta Carotene, a vitamin A precursor. Vitamin A found in animal-based foods like eggs is already in its preformed, bioactive state and is much easier to absorb.⁠
⁠
According to various studies, Preformed Vitamin A, Retinol, absorption efficiency ranges between 75% and 100%. On the other hand, studies show absorption efficiency of β-carotene may be as little as 3%, ouch!⁠

When tested, 92 percent of kale had high levels of residue from at least two pesticides that are carcinogenic, even after washing.

The Healthiest Food to Eat in the World: The Takeaway

Contrary to popular belief the healthy food to eat in the world isn’t plant-based. Rather, these foods are mostly whole animal foods, replete with healthy fats, protein, and complex blends of essential micronutrients.

He found that traditional diets centered around many of the foods on this list, contained 400% more water-soluble vitamins and 1000% more fat-soluble vitamins than the Standard American Diet of his time.