How Long Does it Take to Digest Beef?

One of the most common myths about steak and red meat is that it takes a long time to digest.

The fantasy that red meat rots in the gut on its supposed long road to digestion is often quoted by vegetarians and vegans as a reason for shunning meat.

However, when we take a scientific look at digestion, we find that meat moves through the system at the same speed as other foods. In fact, meat actually digests more completely than plant foods.

So just how long does steak and red meat take to digest? Let’s explore.

How is Meat Digested?

When you eat steak and other meat it enters the stomach. After 2-3 hours, it exits the stomach into the intestines and is fully digested in 4-6 hours.

The exact rate for any individual is influenced by various factors, including total composition of the meal, psychological stress, gender, and reproductive status.

The body is equipped with the exact enzymes required to fully digest the fats and proteins in meat and to utilize meat’s broad spectrum of bioavailable nutrients, including B vitamins, zinc, iron, copper, and numerous meat-specific nutrients like carnitine and taurine.

Studies show that meat from older animals digests faster. While organ meats are more digestible than muscle. Meat digests more slowly when cooked with high-carb foods like rice and potatoes.

Why Do I feel Fuller for Longer When I Eat Meat?

Eating meat, especially fatty steak, is highly satiating. This means that you feel fuller for longer and don’t have food cravings when compared to eating high-carb foods like pasta and grains.

The body responds to high carbs by secreting a hormone called insulin. The job of insulin is to convert excess sugar into fat. This fat accumulates in and around your organs and is stored on your body.

But even though carbs make you fat, instead of feeling satiated, elevated insulin levels trigger more other hormones that increase hunger along with the perceived pleasantness of sweet tastes.

In other words, eating carbs makes us crave carbs. Meat is essentially a zero carb food so it doesn’t have this effect.

The fullness you feel from meat compared to plant foods has nothing to do with how long it takes to digest.

Digestion of Meat vs. Vegetables

The optimal process of digestion is to completely break down the food we eat into individual fatty acids, amino acids, sugars, and micronutrients.

All of these nutrients then get absorbed through the intestinal walls into our bodies and are used to provide energy to our cells and support all our physiological functions. 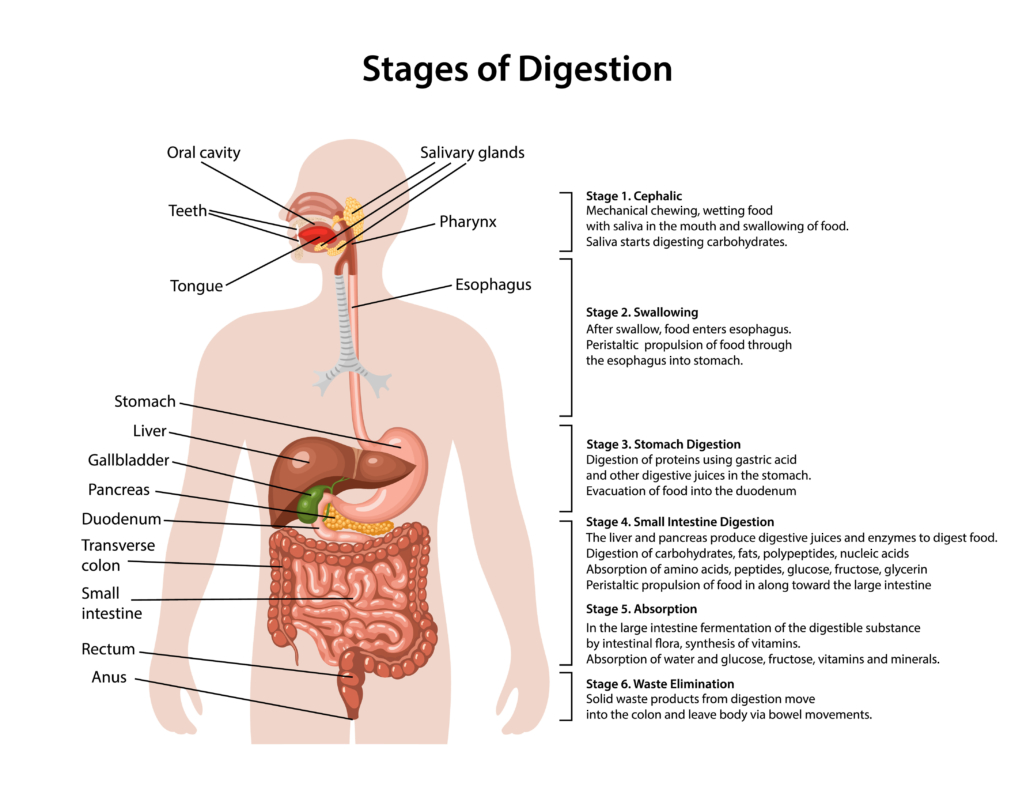 All food, including meats and plants, is crushed by chewing and sent to the stomach.

Interestingly, the stomach acidity of humans is higher than all omnivores,  most carnivores, and equal to that of scavengers. This speaks to our evolutionary history as carnivorous scavengers, even before we became carnivorous hunters.

The acidic slurry in the stomach is called “chyme.” The stomach then releases chyme into the small intestine.

In the small intestine, bile is released to emulsify fats. Lipase further breaks down fats, while chymotrypsin and trypsin further break down proteins. Various enzymes, including amylase and sucrase, break down complex carbs and sugars.

As this breakdown takes place, sufficiently small compounds, including amino acids, free fatty acids, and individual sugars, get absorbed through the intestinal walls.

The last stage of digestion occurs after the ileocecal valve opens and releases the remainder of the substance from the small intestine into the large intestine.

The large intestine is home to our microbiome, comprised of trillions of bacteria.

The job of this bacteria is to break down the remainder of what our enzymes couldn’t. This includes indigestible fiber from plants, dead gut bacteria, and other waste products.

The definition of rot is to undergo decomposition from the action of bacteria or fungi.

Studies show that there are only trace amounts of meat substances undergoing digestion in the large intestine, i.e., the place where food goes to rot.

Dr. Kiltz's Take
The bottom line is vegetables, grains, legumes, and fruit fibers rot in the gut, but not meat.

A (Graphic) First-Person Account of How Efficiently Meat Digests

This first hand account from an intestine transplant survivor who underwent a period in which he only had a stomach and part of a small intestine is a first-row seat to what is and isn’t, digested by the small intestine.

“Because I had such an extremely short bowel, my output was very high because no absorption had taken place. I was fed and hydrated by infusion and could literally live without eating or drinking at all. Because of my excessive output, we had to make a rig that had a hose extending from the ostomy bag that drained into a one gallon jug. Often the hose would get clogged and my wife or sister would have to use a coat hanger wire to unplug it. Now if vegan pseudoscience is right, we would suspect that the hose was being plugged by pieces of meat.

“Never once did we see any solid chunks of meat. I became so curious about this that I once swallowed the largest chunk of meat I could possibly get down without choking. Because of the shortness of my bowel, it only took about twenty minutes for my stomach to empty into the ostomy. Better than two hours later, there were no signs of any meat chunks. What was always clogging the ostomy tube were pieces of vegetables that were not fully chewed.

“Entire pieces of olive, lettuce, broccoli florets, grains and seeds were found. Yet, large pieces of fat were never witnessed. As a matter of fact, all the fat from the meat was already emulsified by the bile into solution. Over time, fat would coagulate on the side walls of the ostomy bag, but never were there any solid pieces observed.”

It’s no wonder that numerous modern studies show that fiber actually increases constipation, bloating, and GI disorders. The idea that we need fiber and that meat rots are two dietary myths that we’re better off without.

How Long Does it Take to Digest Steak and Meat: The Bottom Line

The exact time it takes red meat to digest varies from person to person, and even for the same person depending on various factors like stress level and total meal composition.

However, the idea that meat takes longer than vegetables or that meat rots in the gut is completely false.

In fact, research tells us that digestive enzymes, including pepsin, trypsin, chymotrypsin, and other proteases, are highly efficient at digesting meat proteins. While bile salts and lipase efficiently break down animal fat.

We know this because there is very little proteolytic activity (breakdown of protein into smaller amino acids) occurring in the feces when compared to the small intestine.

On the other hand, the bacterial breakdown of cellulose (rot) from plant foods is rampant in the colon and feces.

The efficiency with which the body digests meat may contribute to the phenomenon among carnivore dieters of pooping far less frequently and enduring far less flatulence. We poop and fart a lot when our bodies need to ferment and expel indigestible plant fiber.