Foods High in Lectins to Avoid

By Liam McAuliffe Published on February 17, 2022

Plant Lectins are sticky proteins that bind to glucose molecules. They’re a key plant defense mechanism that protects them against predators [1]. When humans eat high lectin foods like legumes, grains, and nightshades, lectins can bind to parts of the human body including the intestinal lining, causing inflammation, leaky gut, and related chronic autoimmune responses [1].

Though a recent development, the lectin free diet calls for removing high lectin foods. Doing so allows your body to switch from damage control via chronic inflammation, to restoration and repair mode.

It’s important to note that inflammation is an evolved natural response the body uses to combat harmful pathogens and to promote wound healing.

For nearly 2 million years up to 10,000 years ago, humans ate mostly meat with essentially none of the high lectin grains, sugars, vegetables, and industrial oils that make up the bulk of the standard American diet [2] 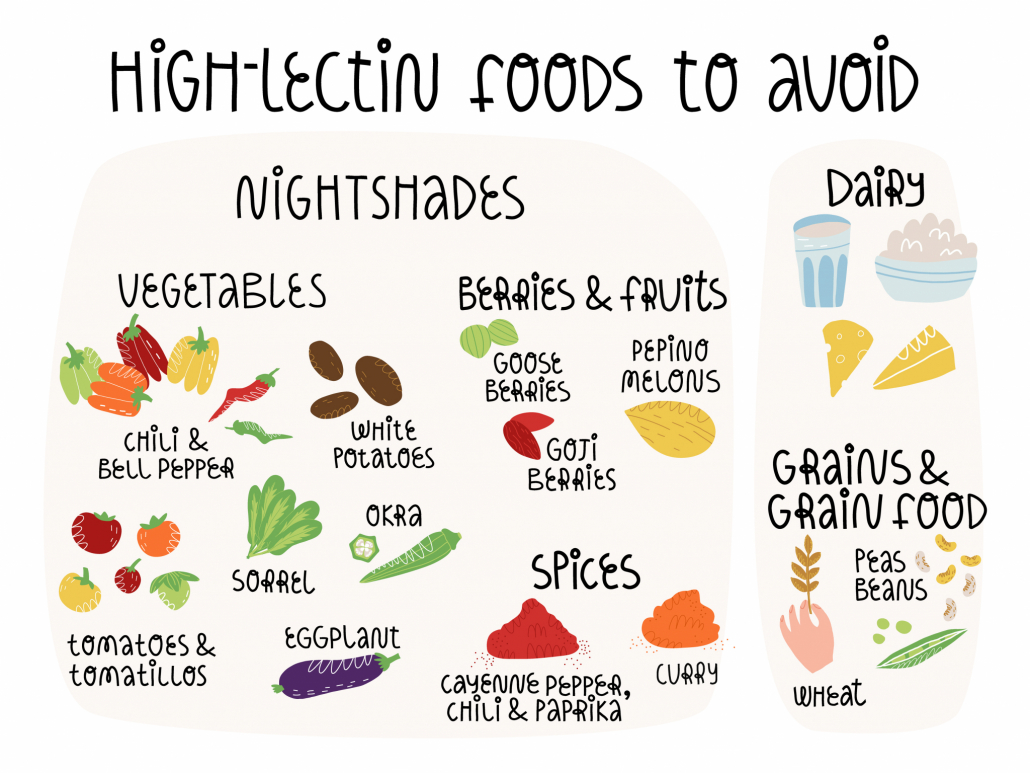 The idea of eliminating lectins is part of the “discordance theory”. This means that there is a discord between the foods humans evolved eating and thriving on, and the industrial foods we eat due to modern agriculture, convenience, and economic forces [5].

Since lectins bind to sugar, the modern high sugar, high lectin diet may be especially capable of fueling chronic inflammation due to lectin binding to sugar molecules in our joints, between our nerve junction, within our myelin sheathes, and between our intestinal cells [3][4].

To put this in perspective, 15% of the calories in an American diet come from grains (mostly processed). And 22% of calories come from added sugars [5].

Add in another 20% of calories from lectin containing vegetable oils and that’s 57% of our calories coming from foods that when consumed together can enhance their individual inflammatory properties.

Lectins are known as antinutrients for their ability to bind to and leach minerals from the body. Eating high lectin foods can inhibit our body’s ability to absorb important nutrients including zinc, iron, and calcium [5].

Damage to the gut wall from lectin binding can also interfere with your body’s ability to absorb and assimilate nutrients from food.

The foods with the highest concentrations of lectins are found in legumes, grains, and nightshade vegetables. Let’s look at some of the standouts from each category.

Legumes high in lectins include many common foods including beans, peas, soybeans, lentils, along with peanuts and cashews that most people think of as nuts.

Red kidney beans are among the foods with the highest concentration of lectins.

However, once cooked well (preferably in a pressure cooker), the lectin content is reduced to a “safe” level of 200-400 hau. Though this level of lectins may be ok for healthy people, it may still be enough to cause problems for people with digestion issues like IBS [6].

Nutritionists like to point out that kidney beans are a good source of low-glycemic, or slow-digesting carbs. But if you’re on a low-carb or keto diet, there is no real benefit to consuming carbs.

These pseudo-nuts are extremely high in lectins. As Dr. Gundry points out, workers shelling cashews have to wear protective gloves to ward off their caustic properties. Cashews are actually part of the poison ivy family and contain various associated plant toxins [7].

The lectins in peanuts are some of the most heat resistant. One study found lectins in the bloodstream of groups of people who ate raw and roasted peanuts [8]

This study also indicates that peanut lectins had crossed the intestinal barrier into the bloodstream, a sign of intestinal permeability, or leaky gut.

When studied in test tubes, peanut lectins have been found to increase the growth of cancer cells [9].

On the other hand, peanuts can provide antioxidants linking them to reduced risk of heart disease and gallstones [9][10][11]. However, there are numerous other sources of powerful antioxidants like many orange-hued keto seafoods, and low carb fruits that do not contain lectins.

Though soy is everywhere and is often touted as a healthy plant-based protein, soybeans are a very high lectin food.

If you chose to consume soybeans it’s important that you cook them at very high heat. Studies show that dry or moist heat cooking at 158°F (70°C) for several hours did not reduce lectin content.

However, even when you reduce lectin content, soy products are high in phytohormones. Consuming these estrogenic plant toxins can contribute to poor muscle tone, water retention, and non-differentiation of cellular function in general. [12][13]

Popular grains like quinoa, wheat, and corn contain high levels of lectins. Most people have heard of the lectin gluten, and millions of people are now avoiding it for good reason.

Wheat products including refined wheat, whole wheat, and wheat germ spikes blood sugar, are low in nutrients, and relatively high in lectins. Yet, because of industrial agriculture wheat is a staple for 35% of the world’s population.

Gluten is a term for a family of lectins found in wheat and various other grains.

The body responds to gliadin, one of the gluten lectins, as a threat by activating inflammation of the gut lining. It also flattens the intestinal villi–the microscopic hair-like structure lining your gut. Over time this response leads to permeability in the gut. [4] 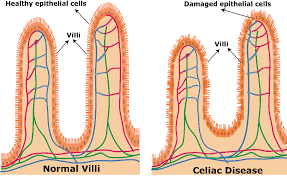 Studies show that within about 15 hours after wheat products, small fragments of gliadin can enter the bloodstream and the inflammatory damage spreads to other body tissues [14]

It’s worth noting that when cooked properly, most lectins in wheat products are eliminated [17][

The absence of lectins in most cooked wheat products has led some researchers to theorize that celiac disease is actually an allergic response to the pesticide glyphosate (AKA round up). This pesticide is found on nearly all conventional grain products in America. The use of glyphosate tracks remarkably closely with increased instances of celiac disease [18][19]. Corn, like most grains, is very high in lectins. While accounting for 60% of the world’s food production, many people eat corn that is minimally cooked. Low heat and minimal cooking of corn preserves their lectin content and passes them into the bodies that consume them.

Over time, lectins that attach to insulin receptors can contribute to insulin resistance, increasing chances of high blood pressure, inflammation, and type 2 diabetes [20][21][22].

Hailed as a gluten free alternative to wheat, quinoa is a high lectin food when not prepared properly.

The ancient Incas eliminated lectins and other antinutrients like phytates, by soaking, fermenting, and cooking their quinoa.

Modern studies show that when properly prepared it is possible to remove all detectable lectins from quinoa [23].

Nightshades are one of the most common families of plants you’ll find at the grocery store, and they all contain high levels of lectins.

All of these foods contain lectins, concentrated in higher levels in their seeds and peels.

Studies looking at the effects of tomato lectins on animals have shown mixed results.

One study on rats found that tomato lectins bind to the gut wall, but didn’t appear to cause damage [25].

While a study on mice found that tomato lectins can cross the gut barrier into the bloodstream [26].

If you are to eat tomatoes be sure to remove their skins and all seeds–these are the parts with the highest lectin content.

Potatoes are the most popular member of the nightshade family, yet contain various toxic and antinutrient compounds known collectively as phytoalexins.

Animal and test-tube studies suggest that lectins can be linked to potato allergies in humans, though no human studies have been conducted [27].

We know that lectins from food can accumulate in animal tissue. And this has led some experts to warn that conventional meat may be a high lectin food.

Many vegetable oils are made from GMO crops that have even more lectins for the purpose of resisting pests.

The fats in vegetable oils are also primarily Omega-6’s, contributing to an Omega-6 to Omega-3 imbalance that has been linked to inflammation [28]. Additionally, these conventional seeds and legumes are sprayed with the same glyphosate pesticides (Roundup) as wheat.

Consuming vegetable oils can subject your body to a triple dose of inflammatory compounds.

Most American dairy comes from cows that produce the A1 dairy casein protein beta-casomorphin-7. This protein acts much like a lectin and has been associated with various health issues including [29][30][31][32]:

On the bright side, A2 dairy from goat, sheep, buffalo milk, and specific breeds of cows contains the A2 dairy protein. A2 dairy has been shown to be far easier to digest [33][34].

Lectins are also found in abundance in the skins and seeds of a variety of popular squashes, including [35]:

Between 33-60% of the foods most people eat are high in lectins. For vegans and vegetarians, the percentage is higher.

Though a significant portion of lectins can be eliminated through proper processing, eating an abundance of high lectin foods can lead to chronic exposure with cumulative effects.

In addition to lectins, many high lectin grains and legumes contain various plant toxins and antinutrients and have been exposed to toxic pesticides.

You can avoid lectin exposure by centering your diet around grass-fed and pastured meats, fish, A2 daily, proper preparation of grains and legumes, and by practicing a carnivore diet.