Coffee Nap: Benefits of Caffeine Before a Nap

When we’re feeling lethargic at work we make bee-lines to the coffee shop. And when we’re off work all we want to do is sleep. But instead of avoiding a nap and simply reaching for your coffee cup, or avoiding life and snoring away on the couch, there are benefits to combining the two into a ‘coffee nap’ or ‘caffeine nap’. The coffee nap is a strategy to help you get the greatest energy boost out of your nap.

Let’s take a deeper look at the benefits of caffeine before a nap.

What is a Coffee Nap?

The coffee nap is typically done by drinking a cup of coffee right before a shorter, power nap.

This micro nap should only be about 20 minutes in length in order to receive the benefits from the caffeine. By using both of these energy boosters it can increase energy levels more than just using one. This happens because the caffeine kicks in right as you are waking up.

Once the caffeine has reached the brain it begins to compete for a spot on our brain’s cell receptors. The cell receptors are typically occupied by adenosine molecules—a byproduct of brain activity. [1]

When adenosine molecules reach large amounts they begin to cause fatigue. While sleeping, the adenosine is naturally removed from the brain.

This is the key to caffeine naps: as you nap, your brain naturally removes some of the excess adenosine. This makes it easier for caffeine to reach the cell receptors when you wake up.

Caffeine has a higher chance to bind to the receptors in your brain and block the receptors from accumulating more adenosine. The result is that you feel more awake throughout the day.

Origins of the Caffeine Nap

The origin story behind the caffeine nap began in 1994 with researchers at Wright State University in Ohio. The researchers enlisted 24 healthy male college students and split them into two groups. One group was assigned as the caffeine group. The other acted as a control group.  [2]

To begin the study, the subjects had a normal night’s sleep.  Then they were given a sequence of baseline tests. These looked at the subjects’ concentration levels, logical reasoning skills, and basic math skills. Once the tests were complete the subjects were kept awake for a 24-hour period without any sleep.

After 24-hours the subjects were allowed two short scheduled naps. These naps lasted about 15-20 minutes total—they were followed with a 100-milligram dose of caffeine or a placebo that contained no caffeine. One cup of coffee is roughly equivalent to 100-milligrams of caffeine. After their caffeine intake, the subjects then retook the tests they performed prior to the 24-hour period.

The researchers found the placebo group tests to be much lower than their baseline scores in every category. The caffeine group, on the other hand, achieved about the same scores as their initial tests.  [3]

How Does the Caffeine Nap Work? Looking back to the section about the science of caffeine naps — we know the stimulant’s interactions with adenosine molecules is what makes us feel more awake. Our body’s desire to sleep after reaching a point of fatigue is a process known as our sleep drive.  [4]

The longer we stay awake, the more our drive to sleep increases. Our body induces feelings of sleepiness when there is an accumulation of adenosine, a byproduct of our brain’s main energy source — adenosine triphosphate (ATP).

A short nap allows our body to naturally reduce adenosine, making it easier for caffeine molecules to find receptors in our brains. Less adenosine and more reception of caffeine in the brain lead to more energy.

Benefits of a Caffeine Nap

The overall benefits of a caffeine nap are still unknown. However, we do know that it provides us with little to no drowsiness when we wake up.

It’s also a way to maximize your time–by napping during the time when you’re lethargic and waiting for the caffeine to kick in anyway.

For people practicing intermittent fasting, coffee is one of the few beverages that won’t break your fast.

How to Do a Caffeine Nap 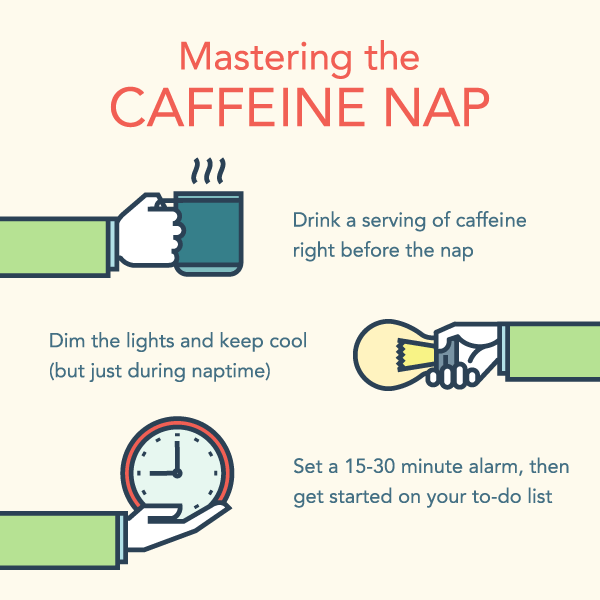 The process of taking a caffeine nap is easy to follow.

This ensures the caffeine reaches your brain at the same time. If you are unable to drink coffee quickly—allow cooling time or an espresso shot.

The best option is unsweetened black coffee because the sugar in your beverage may reduce the effectiveness of your coffee nap.

Right after consuming your coffee, it is a good idea to set an alarm, ensuring you wake up around the same time the caffeine is taking into effect.

If you aren’t a nap person and find it hard to fall asleep in that time frame, don’t try and force yourself to fall asleep. Simply resting your eyes and calming your breath can be a great way to reach the same effect.

If you can’t fall asleep, try “boxed breathing” where you inhale for 5 seconds, then slowly exhale for 10-15 seconds. Do this 15 times. This triggers your nervous system to enter the “parasympathetic” mode of rest and relaxation.

The nap shouldn’t be longer than 20 minutes.

A coffee nap can happen at any point in your day, but it is important not to take the nap less than 6 hours before you go to sleep.

Trying this technique close to bedtime can have adverse effects on your body’s ability to properly sleep.

Possible Drawbacks to a Caffeine nap

With any sleeping and caffeine combinations, there may be drawbacks to your overall sleeping schedule affecting your normal productivity and health.

If caffeine naps are used too often or as a complete substitute for sleep, there can be negative effects on the body.

In order to avoid sleep disturbances, your coffee nap shouldn’t take place at least six hours before your bedtime.

There are a few ways to help induce sleepiness prior to bed, a good bedtime yoga routine may help you avoid sleep problems in the first place.

The most important takeaway is to remember the importance of consistent nighttime sleep. Use caffeine naps as an augmentation to your energy needs, and not the solution.

Giving your body more time to rest is a great way to improve overall health, and combining strategic rest times with caffeine can increase your alertness and energy levels.  [6][7]

It’s important to note that a caffeine nap late in your day can negatively affect your sleep patterns. Caffeine is metabolized by the liver, and about half of it is eliminated in five to six hours. [9] So if you’re sensitive to caffeine, you may get better overall benefits from simply napping without caffeine. What Can You Drink During Intermittent Fasting?